Covid19 has had a strong influence on most of the major ad platforms (I’ve heard from multiple large Facebook advertisers that CPCs and CPMs have fallen by 30-40%, and one advertiser told me that Youtube ad inventory cost decreased by 80% at one point!)

Since B2Linked specializes in LinkedIn Ads, we dug into our data to find out how costs and engagement rates have been affected over the last several months during the Coronavirus pandemic those advertising on the platform.

Candidly, we definitely noticed ad costs fall a bit, but from my viewpoint, it seemed like only 5%-10% (If you heard any interviews where I was asked about it, you may have heard that number. I was shooting from the hip on that.) I wanted to put accurate numbers to it, though, since now we have several months’ worth of data, as well as a noticeable rebound.

This data represents around $1.5 Million in ad spend on the platform across 2,898 campaigns, so it feels robust, but it may still be a bit more limited, so if you have more data and want to combine datasets, let me know 🙂

We ingested the $1.5M in adverting spend, and segmented by ad format and bid type, and analyzed the differences in both average cost and average clickthrough rate by day and by month.

We followed the performance from Feb 1 through Aug 28th, and we saw average costs decline from February to April, and then have rebounded, and even fully recovered in some cases.

Overall, we found Costs Per Click to drop 2.9% from February to March, and then dropped another 25.2% from March to April, for a total drop that peaked at 28.1%.

Then we noticed a recovery of 11.5% in May, and then a continued recovery through August.

The net result is that, overall, we’re currently paying 13.4% less per click than where we started before the start of the pandemic.

For many, this spells opportunity to buy high-quality LinkedIn traffic at a 13% discount. 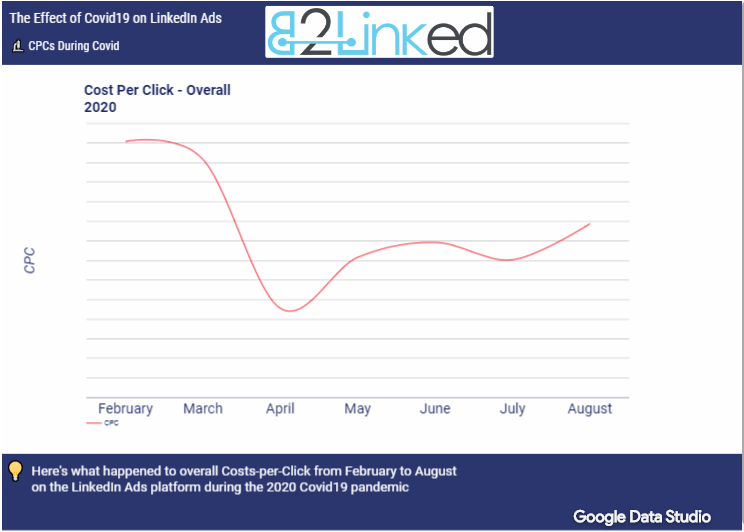 Interesting to note that when we look at just Sponsored Content ads, we see a similar 27.7% drop in costs, but only a 6% recovery, so the most competitive inventory on LinkedIn is currently running at a 21.7% discount! 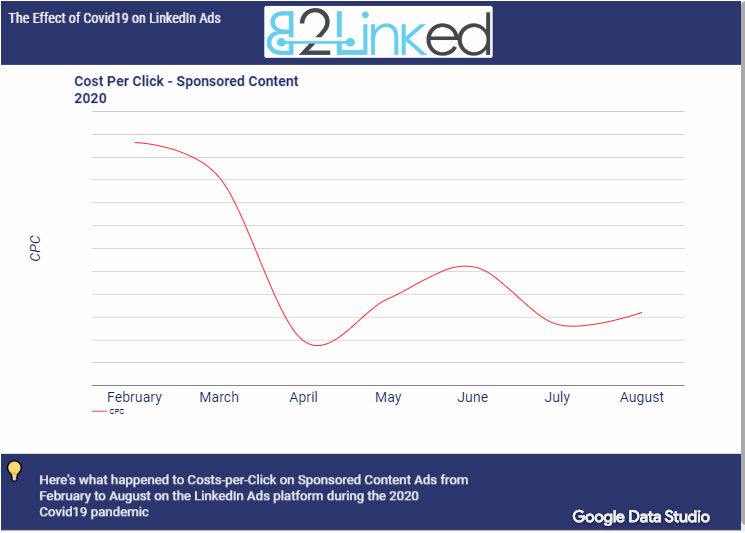 Since the platform overall is at a 13% discount right now, but Sponsored Content is a 21% discount, it stands to reason that some of the other ad formats are currently costing at a premium. And this is true when we look at the data:

We know there is a significant difference in costs on LinkedIn, depending on the bidding model we select. This difference is evident in the data, and you can see from both of these relativistic charts.

The lesson here is the majority of advertisers should be bidding CPC, and not Autobidding or CPM because it’s causing them to pay more. The simple reason why advertisers are using these inefficient bid types is that “Autobidding” is the default bid type, so advertisers who don’t know better will often just go with the default.

A low-bid CPC strategy is cheaper than Autobidding about 90% of the time (check out this podcast episode if you want to dig deeper into when it makes financial sense to switch: https://b2linked.com/blog/ep06/). 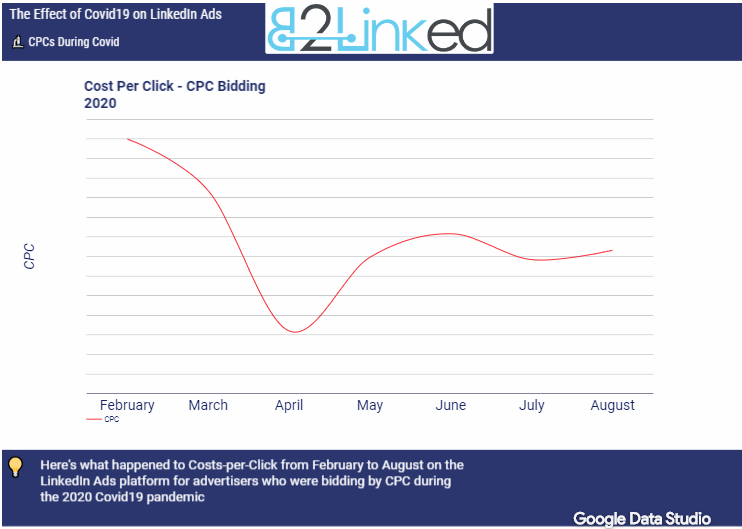 When Did the Pandemic Start?

What’s so interesting here is we were expecting a precipitous drop right in the middle of March while advertisers came to grips with the reality of impending business closures and potential global recession, but the data didn’t tell that kind of story in March. Check out this heatmap of CTRs and CPCs, by day, during March.

Since B2B moves a bit slower, it looks like companies waited a bit to cut budgets back, and actually made those cuts in later March and early April as we see costs start to fall after about the 22nd of March.

I get it—you’re busy. Here’s your “Too Long; Didn’t Read” executive summary so you can go about your day.

If you know anyone who is interested in LinkedIn Ads, would you mind sharing this with them? We’d love to see this information reach all those who are advertising!

AJ Wilcox, and the rest of the B2Linked.com team